Mens Slippers: Get cosy this Winter in our new cosy slippers for AW20

Mens Slippers; some might say they are the perfect gift for the man that has everything. A toasty pair of mens designer slippers is the one piece of footwear almost every man owns, and would gratefully receive come Christmas. They are the definitive footwear pleasure at the end of a long day or, if like us, you are working from home, probably the only piece of footwear you are currently wearing more than once. Here at UnderU we take our slipper buying very seriously and over the years we have... Read More

Puma men’s underwear is a new brand for us at UnderU. With an emphasis on sport and performance underwear, at a reasonable price. Puma are fast becoming one of our go-to sport performance underwear brands. Puma men’s underwear Brand History Currently, Puma is the third largest sportswear manufacturer in the world. In 1924, Rudolf and his brother Adolf Dassler had jointly formed the company, Dassler Brothers Shoe Factory. The relationship between the two brothers deteriorated until the two agreed to split in 1948. Then forming two separate entities, Adidas and Puma. Following... Read More

Our Men’s French Connection men’s underwear is now in our huge end of season sale French Connection underwear shot to fame in the 90’s with their slogan t-shirts emblazoned with various cheeky FCUK messages. From “FUCK plastic,” to “too busy to FCUK,” they thought of it all. French Connection then went onto produce cult-like collections each season; their menswear collection being at the forefront of the high street for many years. Fast forward 20 years and French Connection have become a household name. Their menswear, womenswear and now homewear are... Read More

Our Men’s Swimwear sale has started and so has a very wonderful Indian Summer here in the UK. So, what better time to grab a bargain and splash out on some luxury men’s designer swimwear? This year our sale is extra packed with fantastic designer pieces; with so few people travelling this year, many designs that always sell out (hello Versace and Armani) are still in stock, and better yet…they have up to half price off! Classic swimwear in our men’s designer swimwear sale Probably the best type of investment... Read More

Boys Designer Underwear for 2020 from UnderU.com

We started stocking Boys Designer Underwear a few years ago and knew it was a smart move. The market since then the market has gone from strength to strength. Along with designer childrenswear, Boys Designer Underwear is big business. And it should be; new customers are constantly being born and existing ones rapidly grow out of, lose or ruin their favourite clothing. The UK kidswear market was worth £6.3bn in 2019 and is predicted to grow to £6.7bn in 2020, Euromonitor International data indicates. A 2019 report from the market... Read More 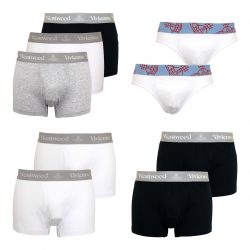 We discovered Vivienne Westwood Underwear last year and decided we had to bring it onto the site ASAP. Westwood needs no introduction, her designs are almost a British Institution. Vivienne Westwood Underwear designs are unique in that each design encompasses the brand wholeheartedly. It’s unusual to find such a high-end designer that has paid so much attention to each part of of the design process. From the fabric compositions to the non-roll waistband; each design is exactly what you would expect from such a notorious designer. History of Vivienne Westwood... Read More

Tommy Hilfiger Swimwear for 2020 at UnderU.com

Tommy Hilfiger Swimwear is always a highlight in our men’s swimwear collection. Their designs always symbolise the brand and each piece is distinctive ‘Tommy’. Year on year the brand become more and more popular; constantly reinventing themselves and keeping their designs fresh and current. This season Tommy Hilfiger’s swimwear collection is in their true preppy, college style. Tommy Hilfiger Swimwear History Tommy Hilfiger is one of the world’s leading designer lifestyle brands and is internationally recognised for celebrating the essence of classic American cool style. Featuring preppy men’s swimwear designs... Read More

Milan: The Fashion Capital of the World

Starting off, which cities are fighting for the title of ‘The Fashion Capital of the world’? Milan Paris New York London Which city do you think is the fashion capital? It is really up to personal opinion when deciding which city should take the lead. Lets start with Paris… Paris’s fashion industry, as you probably already know, is a deep-rooted aspect of French culture. As a matter of fact, it proudly dazzled in the spotlight after being the first to recognise clothing as a business. Did the foundation of fashion... Read More 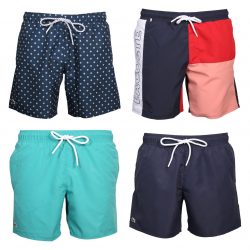 Just arrived online for SS20 are our Lacoste Men’s Swim Shorts. We started working with Lacoste last year and since then brand has gone from strength to strength here at UnderU. Although we can understand why; Lacoste swimwear is classic and sophisticated – perfect for making the everyday that little more special, and don’t we all need at bit of that at the moment? Whether you are on the beach, or, more than likely this year anyway, sunning yourself in the cote d’back garden. Lacoste men’s swimwear will look perfect.... Read More

When was the men’s baseball cap invented? Out of no surprise, this type of hat was invented as a sun visor to wear whilst playing baseball. The men’s baseball cap was derived from earlier hats that were popular in the late 19th century. Such as the “deerstalker”. As you can see below this is a funny looking hat which was composed of two stiff visors and was typically worn during hunting. Subsequently, this type of hat became widely noticed due to its association with Sherlock Holmes. In fact, men’s baseball... Read More