X
This site uses cookies to provide and improve your shopping experience. If you want to benefit from this improved service, please opt-in. Cookies Page.
Accept Cookies
4 for 3 on all orders: enter "443" Code at checkout (excl. Sale)
Menu
Men's Underwear

Our comprehensive guide to choosing the right men’s underwear, from boxers to briefs and everything in between….

Considering they’re the first item of clothing you slip into every day of your life, pants are probably the last item in their wardrobes guys put time into researching. However, it’s worth doing so – getting the right pair of pants in your armoury not only means you feel better all day long, but also means your clothes will hang better too.

The thing that’s most important when you’re buying men’s underwear is to be honest with yourself. This is the layer that sits closest to your skin, so if your underwear doesn’t feel good or doesn’t support you enough, then it’s time to edit.

There are also clear signs that you might be wearing the wrong size altogether. If the leg bands are digging into your thighs, you’re probably wearing a size too small. If your waistband keeps slipping underneath your trousers every time you bend over, you are either wearing a size too big or the elastic has totally gone (and it’s time to have a throw-out).

Best for: men with larger thighs (and those who are, ahem, more well-endowed)

Forget those briefs your mum used to buy you, the new generation of designer models on the market right now are sleeker and more stereotype-breaking than ever. And there’s a reason why you’ve seen footballers who put in the legwork like David Beckham and Cristiano Ronaldo wearing them in campaigns: they’re the best choice for guys with bigger thighs. If you’re repping thicker trunks, you’ll tend to find underwear with legs attached like boxer-briefs, tend to ride up during the day, causing a roll in the material that will inevitably show through slim trousers.

Briefs are also good for shorter guys as they expose more of your legs, making them appear longer and you, therefore, taller.

Perhaps most importantly, this style is superbly supportive – so spot-on if you’re a cardio fiend. While for day-to-day dressing we’d recommend going for a pair in 100 per cent cotton, just be sure to look out for versions in a technical fabric for your workouts as these will wick away moisture from your skin – no man-man fibres, unless you’re particularly keen on getting a rash down there.

One thing to bear in mind is different labels cut leg holes at different angles – and, just like the arm holes on a Savile Row suit, this can affect the way they fit. A slimmer section of material underneath the waistband usually means less material at the back of the pants themselves, so these are more suited to guys with smaller posteriors (or one that’s continually being tightened up at the gym). If you are blessed with something larger back there, look out for briefs with slightly more material above the thigh area as this will give more coverage behind.

Just avoid those uber-trad Y-fronts that sit below the belly button. No prospective date wants to be reminded of their grandpa when you strip off for the night.

If you’re not the kind of guys who regularly wears suit trousers or slim jeans, boxer shorts offer the greatest breathability and are far less revealing than any other style. However, that comes at a cost: boxers offer very little support down there.

While you probably first got into these in your teens as a rebellion against the tighty-whities you were forced to wear as a kid, this is another style of men’s underwear that has got a gentlemanly makeover in the past few years. The baggy cut and bunched, elasticated waist might be the most traditional version of these pants, but plenty of designers now offer shorter, slimmer-cut options with a stretch band waist. While these are still tricky to slide under more trousers, they are a viable option for guys with slim thighs.

As a side note, if you’re a man who has more substantial thighs that tend to touch together when you walk, boxers can be tricky: the low-cut of the crotch often means your junk gets caught in the crossfire, so to speak. And if you’re wearing trousers, this can not only get sweaty, but also potentially quite sore.

However, this style’s breathability means they are the best choice for sleepwear – go for a pair in 100 per cent cotton cut from either a solid fabric or a cool pattern with a trim, tailored waistband.

Best for: taller men (and guys with an ample posterior)

As is implied in the name, boxer briefs are the lovechild of boxers and briefs: the shape of traditional boxer short, but cut on a more fitted block out of jersey material. Since the rise of slimmer silhouettes in menswear over the past decade or so, this has become to go-to style for most guys. Arguably, this is the most versatile style of men’s underwear out there – not as revealing as briefs, but offering all the support of them with added thigh-skimming powers.

Boxer briefs usually hit from the mid- to low-thigh, often with a button fly. This means that these can also be a great additional style, alongside briefs, for guys with larger thighs – the added material between your legs means that it can help avoid any rubbing or chafing. That said, if that’s your goal, be sure to choose your pair wisely: go for the longer length and make sure they’re not too tight, as they will bunch up under your trousers.

Where boxer-briefs really come into their own is for guys who have more to store back there. Men with larger posteriors will often find that briefs don’t provide enough coverage, and in order to get boxers that fit over the thigh-and-bum area, the waistband will end up being too loose. With close-fitting fabric that stretches over your legs, boxer-briefs offer the perfect halfway house.

While this is a versatile style and will suit most men, a higher waistband is also usually a key component of boxer-briefs, which makes them especially good for taller guys who find that their pants can slip down under the trouser-line when bending over. 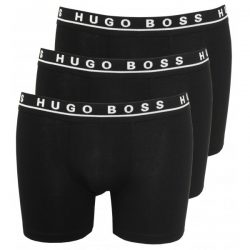 The newest style on this list, trunks are a shorter version of the boxer-brief that has grown in popularity with the rise of super-skinny trouser styles over the past five years or so. When it comes to length, these tend to sit from the mid- to upper-thigh. Some may come with a keyhole fly, but usually this style is flat-fronted – and sometimes includes an extra pouch of fabric at the front for added support and… enhancement.

As this style fits more flush to the skin than boxer-briefs, often with a higher proportion of stretch within the fabric, this style is best worn by guys who are slimmer of thigh – anyone with larger thighs might find that the pant legs will ride up when you walk.

Another advantage for guys with slimmer legs is that their tight fit means trunks will not leave a bunch of excess fabric around your thighs, thus making them appear thinner than they are. Look out for a pair that bisects your thigh at its widest point as this will emphasise that width and make your legs look more muscular.

This style also usually has a lower waistline than its boxer-brief counterpart, meaning that they sit lower on the hips. Especially good if you’ve been putting in the hours on that eight-pack.