X
This site uses cookies to provide and improve your shopping experience. If you want to benefit from this improved service, please opt-in. Cookies Page.
Accept Cookies
4 for 3 on all orders: enter "443" Code at checkout (excl. Sale)
Menu
Speedo

Speedo originated in 1914 under the brand name ‘Fortitude’, which was taken from the motto on the clan MacRae crest. It didn’t become known by its now famous brand name until 1928.  The company was started by a young Scot called Alexander MacRae, who migrated to Australia in 1910, and set up an underwear manufacture business called MacRae Hosiery manufacturers. In response to the growing beach culture in Australia, MacRae quickly expanded his operations to include swimwear and changed the company name to MacRae Knitting Mills.

By 1929 the first Speedo swim shorts were being produced. The newly-named brand soon established itself in the hearts and minds of the swimmers and the general public, thanks in part to Swedish swimmer Arne Borg, who set a world record in Speedo swimwear.

Fast forward 70 years and Speedo kicked off the 21st century in style, launching the revolutionary FASTSKIN swimsuit. Its award winning sharkskin-based design was eagerly received by swimmers like Grant Hackett, Michael Klim, Inge de Bruijn and Lenny Krayzelburg. The 2000 Sydney Olympics saw 13 of the 15 World Records broken in the suit and 83% of medals won by swimmers.

Again at the Olympic games in London, 57% of all medals won by athletes wearing Speedo, 5 world records were broken.

It’s safe to say in 2016 Speedo have become the swimwear brand for professional athletes, and us regular folk alike.  If your men’s swimwear style of choice is classic minimalist then you will love our new collection of Speedo swim shorts. Speedo’s use of innovative fabrics combined with trend-led designs make them a fantastic choice of men’s swimwear, even if you are more likely to be sipping something cold on a beach instead of breaking any world records while you wear them 😉 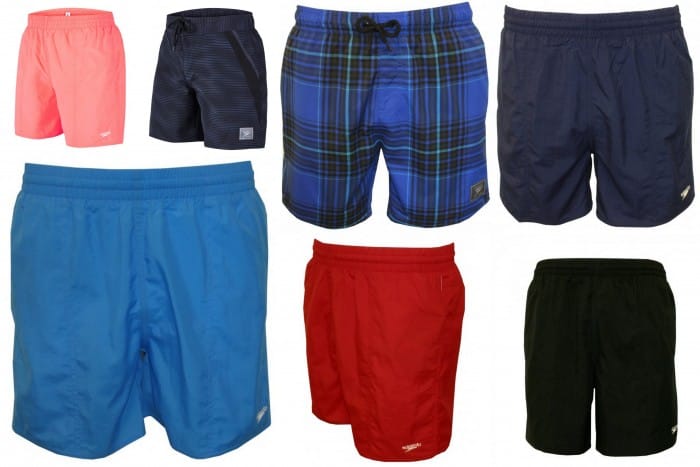 Our full collection of Speedo Swim Shorts is available to shop here.