At first glance, Vilebrequin, the St. Tropez-based men’s swimwear brand known for matching dad-and-son trunks, doesn’t have much in common with the rock legends of The Rolling Stones. But, says CEO Roland Herlory, “In 1971, Vilebrequin was founded in St. Tropez, and in the same year, Mick and Bianca Jagger got married in the city hall of St. Tropez! The whole band was actually in exile on the French Riviera.”

Perhaps a pairing of the two was fated, because the men’s swimwear label is rolling out a small collection in collaboration with the band this June. “Working with The Rolling Stones is truly a huge opportunity.”  “When their agent proposed that we do something together, we knew we had to take it on.” 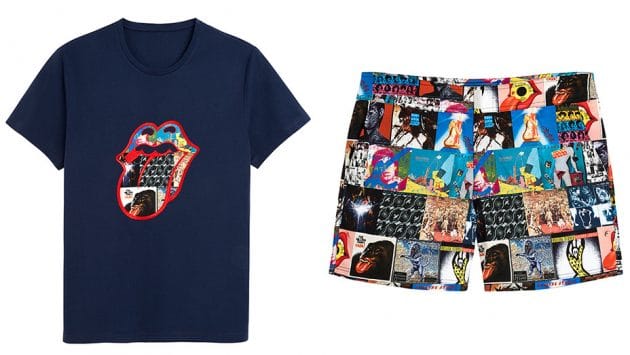 The CEO goes on to add, “Vilebrequin has always claimed to be inspired by its Tropez-ian ’70s roots that are light-spirited and rock ‘n’ roll. They are very close to our spirit in that way.” The three-piece collab took inspiration from the 50th anniversary “Exhibitionism” show. Explains Herlory, “While the exhibit strips back the music, Vilebrequin strips down to reveal a line of men’s swim shorts and beachwear. The Rolling Stones’ style has always been colourful, unconventional and fresh, all with an allure that is very inspiring for us.”

Using a slew of images from the band’s iconic discography — created by artists including Andy Warhol, Robert Frank and David Bailey — the French brand made a patchwork print that it used on two mens swim shorts. The third piece is a black men’s T-shirt with the iconic tongue and lips logo, rendered in the same print.

To further celebrate the partnership, Vilebrequin produced a very limited edition of 30 fishtail longboard skateboards printed with The Rolling Stones logo and cover art graphics to be gifted at the launch party. The bash will also feature a “sharing box” photo booth and an interactive virtual graffiti wall where invited guests can graffiti a digital pair of Vilebrequin trunks.

And although the Stones are not scheduled to be in L.A. for this tribute, Herlory feels confident the Jagger, Keith Richards, et al will be rocking the collection in no time. “I’d imagine they’re extremely busy with the promotion of their exhibition at the Saatchi Gallery in London, but they should be on the beach soon!”

Quotes from this article was originally published by The Hollywood Reporter.