X
This site uses cookies to provide and improve your shopping experience. If you want to benefit from this improved service, please opt-in. Cookies Page.
Accept Cookies
4 for 3 on all orders: enter "443" Code at checkout (excl. Sale)
Menu
Men's Underwear, Tommy Hilfiger

With the US Open starting next week Rafael Nadal had a rather interesting way of training in the form of strip tennis, lose a point, lose an item of clothing.  Of course this was no usual training session, but the launch of Rafael as brand ambassador for Tommy Hilfiger.  He will be the face of its tailored clothing and Bold fragrance and the body wearing Tommy Hilfiger underwear.

Unfortunately for us spectators Rafael only lost a few points against the beautifully clad TH models, so only his tie, a pocket square and his shirt came off, but the event was still a great way for Tommy Hilfiger to launch a new phase in his underwear business.  A new sexier phase to be precise. Everyone has sported a pair of Tommy Hilfiger boxers at some point, “college kids, skaters, all the young people in the ’90s,” Mr. Hilfiger said. “Then it sort of quieted down. We started selling white underwear briefs. White underwear briefs are usually sold to middle-aged guys. And they weren’t sexy anymore.”  Rafael became not only the model, but a focus group of one. “I talked to him at length about what kind of underwear would you wear,” Mr. Hilfiger said.  “Weve revamped our mens underwear collection with a look thats modern, athletic and bold, and Nadal is the ultimate global brand ambassador for this new direction.” 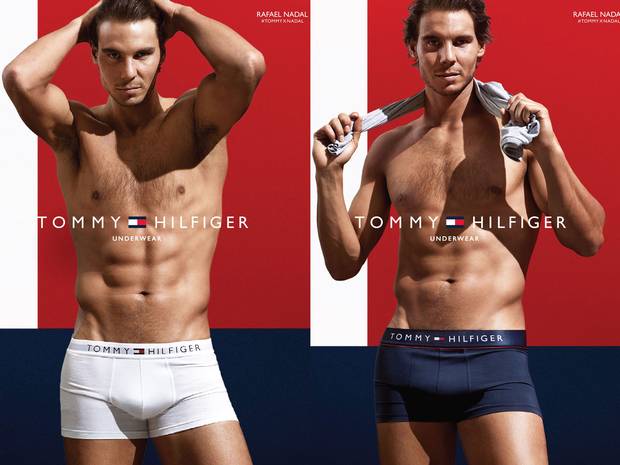 “We’re doing reverse sexism here,” said Jane Lynch, the “Glee” actress and comedian who is gay and served as the match’s umpire. “This is great. Especially the part about Rafa in his underwear. Because that could turn a girl straight, if you know what I mean.”  Here at UnderU we couldn’t agree more Jane!