UnderU.com can now reveal the biggest selling mens underwear brands in the UK.

At the top of our men’s underwear drawer is a pair of Emporio Armani boxer trunks. Worn by A-listing footballer-cum-celebrities Cristiano Ronaldo and our own David Beckham, it seems that UnderU’s customers hold the Italian fashion house in high underwear reverence also.

Even since our own Kate Moss teamed up with Marky Mark’s Funky Bunch to grace the billboards up and down the UK, Calvin Klein has been a market leader in men’s designer underwear and Calvin Klein was our next bestselling underwear brand.

German fashion ‘uber-haus’ Hugo Boss ranks number 3, whilst “breaking” into the top 5 and “ace”-ing us with their innovative designs is Bjorn Borg underwear. If, like us, you are mad about men’s underwear, you will find our top 10 list of men’s underwear brands fascinating: 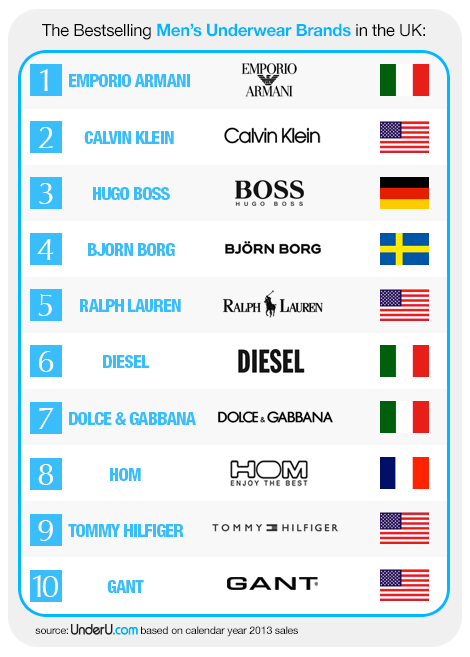