X
This site uses cookies to provide and improve your shopping experience. If you want to benefit from this improved service, please opt-in. Cookies Page.
Accept Cookies
4 for 3 on all orders: enter "443" Code at checkout (excl. Sale)
Menu
Diesel, Men's Underwear

Diesel underwear has long been a favourite at UnderU.com, and over the past few seasons Diesel has been working hard in developing its men’s underwear range. Having just received, photographed, and “photoshop’d” the Autumn Winter 2013 collection, we think that Diesel’s underwear range is hitting the right notes again.

Diesel is a true denim giant and its “Under Denim” concept range of men’s underwear builds on Diesel’s rich heritage, and allows you to still be wearing denim even when you strip off your jeans!! Fabricated in a fine soft stretch cotton, the Under Denim boxers and briefs are comfortable to wear and give the appearance of denim with their authentic denim wash. Diesel have brought out a whole range of different shades, from deep navy to vibrant red and the detailing in the underwear is very impressive, with intricate contrast stitching and embroidered Diesel logos.

Diesel’s Fresh & Bright range of men’s underwear has proved very popular with UnderU customers down the years, bringing a colourful vibrancy to the wearer that is unrivalled by other mens underwear brands. The Autumn Winter 2013 Fresh & Bright collection from the Diesel underwear designers will certainly not disappoint, successfully managing to add stripes to its usual colourful boxer trunks and briefs.

One of Diesel’s Fresh & Bright stripe boxer trunks below: 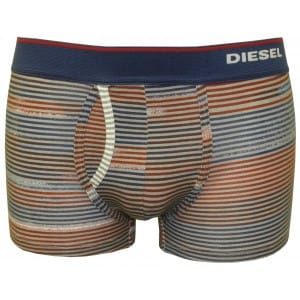